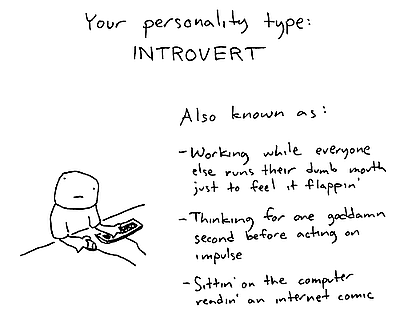 I had a conversation with a customer the other day that resonated with me. This customer is a bartender and has bounds of energy every time I see him. He’s constantly cheerful, even at 7 am and genuinely loves people. He identified himself as an extrovert and said that when he’s down, he goes out to a coffee shop and soaks in the company of people. After an hour of this, he leaves with more energy than when he arrived. 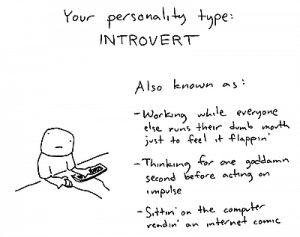 Myself, I identify more as an introvert. I realize that no one is completely an introvert or extrovert, but rather a mixture of both. I lean toward being an introvert in the sense that to regroup or recharge, I go to my apartment and hang out with myself. It may be a few hours or even a few days before I feel like I can go back out into crowds. Recently, I’ve found myself overcommitting. I’m attending more events than usual and it drains a ton of energy out of me. Working FOH at a coffee shop, constantly smiling and conversing, sometimes (rarely) taking crap from customers, wears me out, too.

What I’ve learned in the past year or so is that I do my best creative work by myself and late at night. When in crowds of strangers or at an event that requires me to network, I pretend that I’m a different person- fearless, full of energy, love small talk, and can converse with nearly everyone.

Brainpickings.org is one of my favorite thought-provoking sites to read. “Susan Cain on the Power of Introverts, Live-Illustrated by Molly Crabapple” is a video that made me feel better about diving into seclusion at random times.

Author Susan Cain shines a spotlight on introverts and reveals how over time our society has come to look to extroverts as leaders. Not suggesting that one is better than the other, Susan argues that the world needs an equal space between introverts and extroverts; that an innovative, creative world wouldn’t be the same without the two coming together.

Talking to this customer made me wonder how many other people were introverts and working behind the counter. The bar makes a difference- it’s a physical separation between you and the customer. You have to be personable and you have to converse with the customer. Even if you enjoy only making drinks, you still have to have some measure of customer service. It’s an act for some people, which may be why people in creative performance fields are driven to the service industry for their “bill-paying job.”

As I reflect on introversion and how it’s played in my life, I wish someone had told me that it was okay. The U.S. culture is very much about extroverts from class presentations to networking parties to round tables in college. There was one course I took in college that required the reading of one research paper every week, small group discussion, and class discussion. Participation in class discussion was a huge part of the grade and for the entire semester, the only time I spoke in the class discussion was when I was asked to speak. I was completely fine in small groups, but froze up in the large one. I’m not saying that everything needs to be turned around to accomodate introverts, but it would’ve been nice to know that people who enjoy staying in and reading a book over a party were completely normal.

Myth #1 – Introverts don’t like to talk.
This is not true. Introverts just don’t talk unless they have something to say. They hate small talk. Get an introvert talking about something they are interested in, and they won’t shut up for days.

Myth #2 – Introverts are shy.
Shyness has nothing to do with being an Introvert. Introverts are not necessarily afraid of people. What they need is a reason to interact. They don’t interact for the sake of interacting. If you want to talk to an Introvert, just start talking. Don’t worry about being polite.

Myth #3 – Introverts are rude.
Introverts often don’t see a reason for beating around the bush with social pleasantries. They want everyone to just be real and honest. Unfortunately, this is not acceptable in most settings, so Introverts can feel a lot of pressure to fit in, which they find exhausting.

Myth #4 – Introverts don’t like people.
On the contrary, Introverts intensely value the few friends they have. They can count their close friends on one hand. If you are lucky enough for an introvert to consider you a friend, you probably have a loyal ally for life. Once you have earned their respect as being a person of substance, you’re in.

Myth #5 – Introverts don’t like to go out in public.
Nonsense. Introverts just don’t like to go out in public FOR AS LONG. They also like to avoid the complications that are involved in public activities. They take in data and experiences very quickly, and as a result, don’t need to be there for long to “get it.” They’re ready to go home, recharge, and process it all. In fact, recharging is absolutely crucial for Introverts.

Myth #6 – Introverts always want to be alone.
Introverts are perfectly comfortable with their own thoughts. They think a lot. They daydream. They like to have problems to work on, puzzles to solve. But they can also get incredibly lonely if they don’t have anyone to share their discoveries with. They crave an authentic and sincere connection with ONE PERSON at a time.

Myth #7 – Introverts are weird.
Introverts are often individualists. They don’t follow the crowd. They’d prefer to be valued for their novel ways of living. They think for themselves and because of that, they often challenge the norm. They don’t make most decisions based on what is popular or trendy.

Myth #8 – Introverts are aloof nerds.
Introverts are people who primarily look inward, paying close attention to their thoughts and emotions. It’s not that they are incapable of paying attention to what is going on around them, it’s just that their inner world is much more stimulating and rewarding to them.

Myth #9 – Introverts don’t know how to relax and have fun.
Introverts typically relax at home or in nature, not in busy public places. Introverts are not thrill seekers and adrenaline junkies. If there is too much talking and noise going on, they shut down. Their brains are too sensitive to the neurotransmitter called Dopamine. Introverts and Extroverts have different dominant neuro-pathways. Just look it up.

Myth #10 – Introverts can fix themselves and become Extroverts.
A world without Introverts would be a world with few scientists, musicians, artists, poets, filmmakers, doctors, mathematicians, writers, and philosophers. That being said, there are still plenty of techniques an Extrovert can learn in order to interact with Introverts. (Yes, I reversed these two terms on purpose to show you how biased our society is.) Introverts cannot “fix themselves” and deserve respect for their natural temperament and contributions to the human race. In fact, one study (Silverman, 1986) showed that the percentage of Introverts increases with IQ.

I’ve met a few baristas now who also identify as introverts. Like I said, it’s not a bad thing. I don’t consider it a label as much as I use it to remember how I work best. I connect best with people in small groups or one-on-one settings, which is why I don’t think I’ll be attending too many networking events in the future. If I need to design, I’ll sketch thoughts out in a coffee shop, surrounded by an acceptable amount of people. If I want to party, I’ll organize a potluck instead of going to the club. It’s taken me a good part of the past year to realize this about myself, but I’m happy with it.