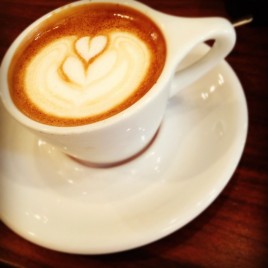 I read somewhere that if you make a difference in one person’s life, then it should be a reason to keep on going in your passion’s path. Five months out from quitting my job, I still believe in coffee. The people I’ve met in this industry are some of the nicest people that exist. And while I love the industry professionals, I’m also very interested in the people I “convert” into coffee enthusiasts. I’ve created a few of those already and I’m quite proud of that. Without naming names, here are their stories:

1) One person I invited out on my coffee crawl almost never drank her coffee black. Let’s call her Annie. I found Annie on Twitter and invited her out, because she seemed to be interested in all things Chicago and enjoyed writing about it. Plus, her follower count helped. Annie’s go-tos were milk and sugar. She also had trouble identifying flavors in the cup. So while the crawl did not instantly turn her into a discerning foodie, she was enthusiastic about learning more about flavors and how to identify them. A few weeks later, she attended her first full-on cupping and confessed that after attending the crawl, she started drinking her coffee black AND she also tastes her food with her eyes closed. Score one.

2) I gave an interview with a college student who had stopped drinking caffeinated coffee, because it gave her awful headaches. Let’s say her name is Sandy. Sandy’s experience with coffee was limited to diners and Starbucks, always with cream. As we all know, diners and Starbucks may not be the best representation of how sweet coffee can get. At coffee shops, she drank tea or decaf. Since we were having the interview in a coffee shop (obviously), I asked if I could give her some coffee to try out and luckily, she agreed. Through the rest of the interview, she sipped on one of the most expensive specialty coffees in the world, roasted by a well-respected roaster. Black. That look on her face after her first sip was a look of wonder. She not only downed the entire mug with no cream or sugar, but she didn’t have a headache AND she returned to the shop later to learn more about coffee. Score two.

3) The last guy I dated was going to Intelligentsia in the morning for his coffee or bringing it home to brew in his Mr. Coffee. By the time we ended things, he had convinced his office to invest in a Trifecta MB, bought an automatic grinder, V60, and last time I checked, a scale. Score three.

4) One person who participated in a crawl was most obviously passionate about coffee. He constantly asked questions to the owners and trainers, often about home brewing. He wasn’t knowledgeable about it, but he really wanted to learn. It turns out that he returned to a featured crawl shop and bought a hand grinder! Score four. You get the idea.

This entire post sounds like a humble brag, but I’m okay with it, because rereading them gives me hope to influencing others into drinking black coffee. Or discovering new tastes, whatever it may be. In the realm of the coffee industry, I think we get so absorbed in the geekiness that we forget about the people who are out there, interested in learning new things, wanting to dive into coffee. Someone actually told me that they felt more comfortable knowing how to order coffee. Yes, people who don’t know how to order coffee still exist. Don’t write them off- this person turned into a specialty coffee drinker!

I interact with a lot of new or uneducated drinkers and it’s wonderful to have an impact on their coffee education. Don’t forget about those lesser-beings out there.