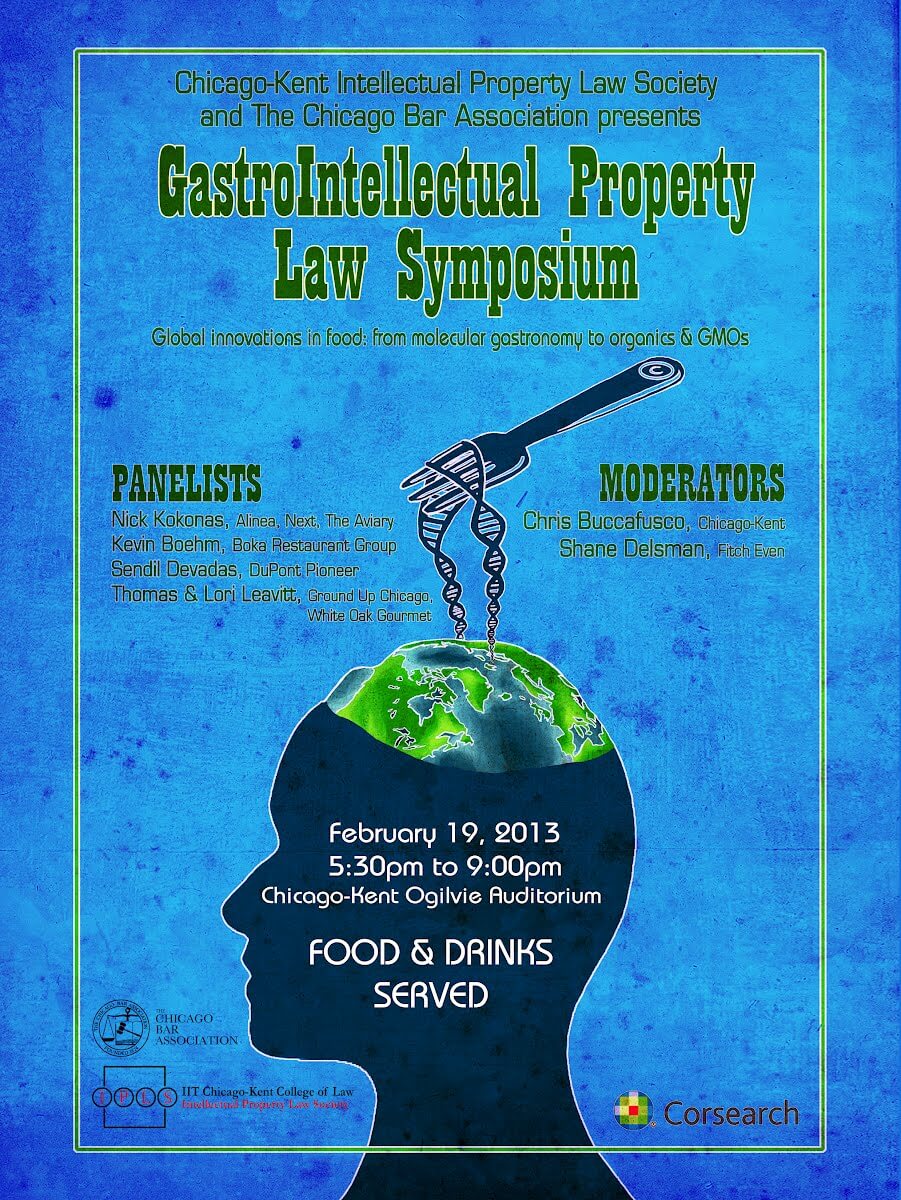 To put it simply: food law.

It was a fairly informative event and for someone without any previous law or IP law experience (me), supremely easy to understand. It helped that most of the panelists were not in law. My friend is a 3rd year student at Kent and was able to offer a student ticket to me. Given my interest in food, food culture, and anything relating to food, I jumped on the chance. Plus, I appear to have several friends who either are IP attorneys or will be IP attorneys.

Another reason for me jumping on the chance to attend this were the panelists. As you can see by reading or clicking through the links below, this was a range of voices from small organic farmer collective to fine dining restaurants to global farming representation. 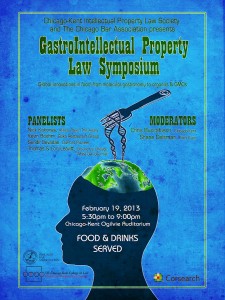 The night began with appetizers and ended with more filling food. What I didn’t expect (upon further thinking, I really should have expected it), was the networking. Glancing around, it was safe to assume that 80-90% of the attendees were either studying law or already attorneys. A few were food writers, by my guess, based on their T-shirt & jeans apparel. Thankfully, I didn’t feel forced to network. It was already a bitterly cold night and small talk conversation was not coming easily to me. Another unexpected part was the presence of ego on the panel. But as my friend told me later, some of the biggest restaurant names in Chicago, possible the U.S. were here. Of course they’d have ego.

The correlation between the food industry trends and coffee industry were interesting to note and perked some questions for me.

Let’s start with innovation. Because this was IP, the first topic of the night was how restaurants distinguished themselves from each other. Dishes are not trademarked, but Nick Kokonas’ business model on his restaurants are to give an innovative experience to diners. Something they can’t have elsewhere, impeccably presented, and most likely can’t have ever again (Next).

In coffee, the best correlation of this would be Theorem.

Nick often receives business proposals for new restaurants and more than often, turns them down. Why?

“If we can’t learn something in the industry, then we’ll say no, no matter what.”

This is fascinating to me. His restaurants are SO high-end that he is able to set trends, not follow them. It’s the same with innovation- he told a story about how a dish’s recipe was tirelessly worked on for months. The same week they were going to put it out on the menu, an overseas restaurant released a similar dish. Nick nixed his off the menu, because,

“Even though we developed it independently, no one else in the world would know that.”

And, to be honest, it was really doubtful that anyone would even have compared the two restaurant dishes and recognized them to be similar. What’s notable here is that he didn’t want even a question to be raised between the two dishes. His model was based on innovation, not imitation.

As he mentions later on in the night,

“It was a marketing decision, not an IP decision.”

If you’ve eaten out in nicer restaurants in Chicago, you may have noticed some attribution to farmers or chefs on the menus. Kevin Boehm spoke about attribution in terms of dishes, especially in GT Fish & Oyster, where chefs have been found on the menus,

“There’s a difference between imitation and inspiration.”

Chefs can be inspired  by another chef’s dish, but morally, they shouldn’t imitate without attribution. And really, they shouldn’t be imitating much at all. Changing one or two ingredients of a dish, but keeping the technique and presentation the same is thought of in the same vein as plagiarism. If a chef’s recipe is being featured in a different restaurant, attribution on the menu is appreciated. It also gives a clear signal for the restaurant that they will give credit when credit’s due.

In Ground Up Chicago’s case, they enjoy giving attribution to their farmers. And this is where the correlation to coffee is apparent,

“Clients may not know the farmer personally, but they appreciate knowing that I build a personal relationship with them.”

These guys work with small farmers who often can’t afford the organic rating. Customers trust that the personal relationship with the farmer has been developed to the point of organic, even if it’s not on-paper organic. Ground Up recognizes the hard work of the farmers and will attribute menu ingredients to these farmers.

Direct relationships with farmers is trending (or rather, here to stay) in the food industry, same as in the coffee industry. For Nick, his restaurants buy all the production from several family farms. It should be apparent here that these farmers inexplicably rely on him for their living. This kind of trust needs to be built up and maintained- I can’t even imagine the amount of work that goes into this relationship. He tells a story about how for the current run of Next, “The Hunt,” he wanted carrots that were harvested after the first frost, which is unheard of. He told the farmers,

“No matter what happens to your product, you’re still getting paid.”

What a reassurance to the farmers!

In coffee, we can liken this to specialty roasters committing to a farmer & helping them along in their livelihood. Just recently, Pulley Collective paid farmers in-full for coffee, some of which was water logged.

On the other end of the specialty spectrum exists the large, corporate farmers who aim to feed people. Again, they fulfill the basic need of hunger, not a first-world country’s need of a fine-dining experience. While coffee is not a “need,” per se, large plantation coffee still has to go somewhere and still has to support families.

The symposium was about innovation, attribution, and farmers in the food industry. Many of the panelists agreed that it would be futile to trademark dishes and recipes, but they also agreed that the industry & online public do tend to police itself on noticing similar dishes. Obviously, one coffee shop can not trademark “the cappuccino,” because it’s too common, but they could trademark a signature drink recipe. Will this be the future for coffee? Or will we remain as open-source and neighborly supportive of each other?

To end, another notable quote from Nick Kokonas,

“We have to eat three times a day. People get very passionate about it.”