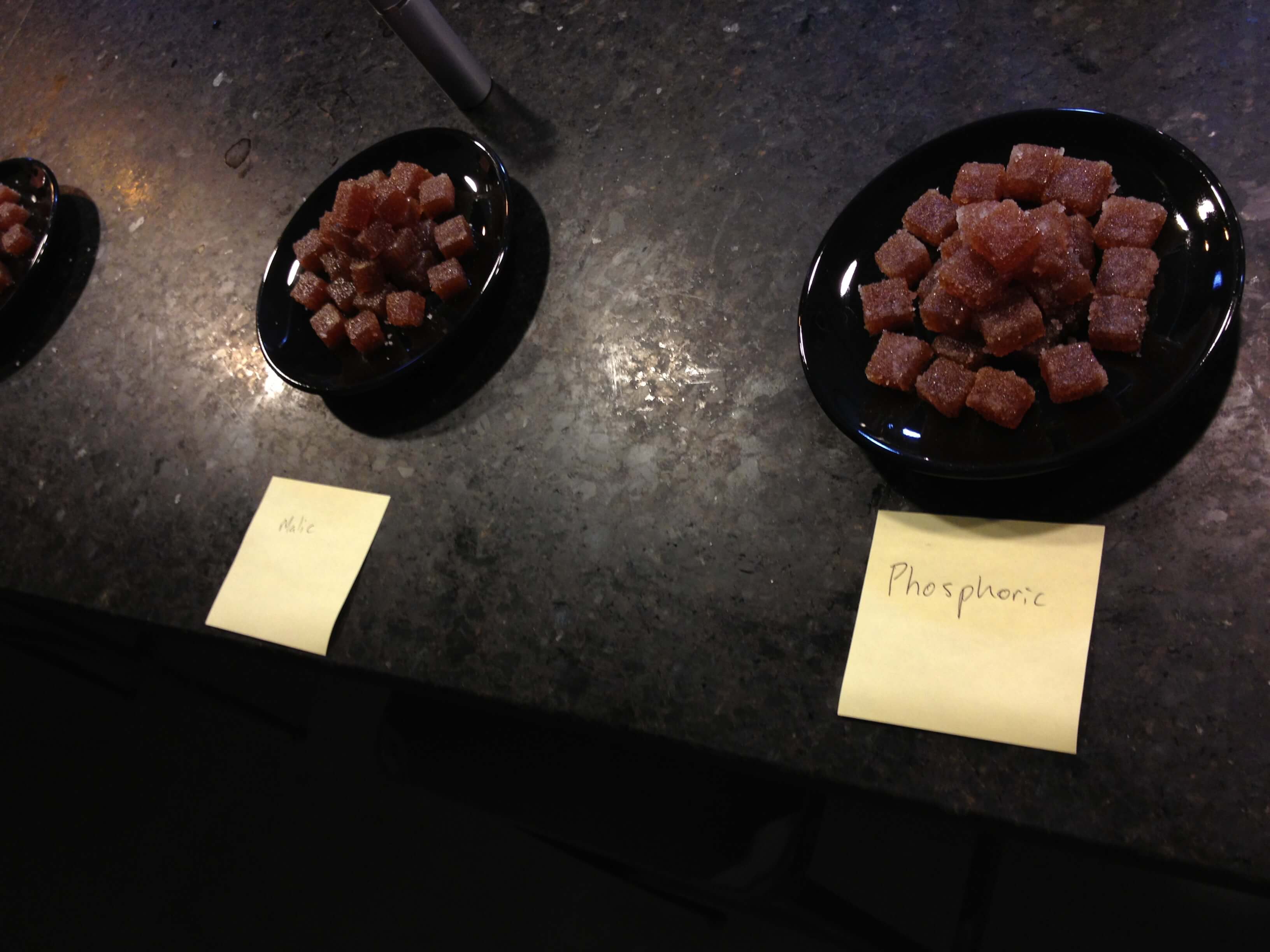 Note: These are my thoughts & notes from a coffee event. Facts stated do not have linkable sources, but were talked about in the lab. If I made any errors, I apologize. Please let me know what they are.

I’ve been attending a lot of coffee events lately and forgetting to write up my thoughts on them. Last Wednesday, Counter Culture Chicago hosted 20 coffee professionals for an organic acid lab. The event was free and open to the public. I guess only coffee pros attended, because the phrase “organic acids” might scare off.. pretty much everyone. The lab was put together by Lydia Iannetti from the Durham training center. The first part consisted of simple, easy-to-grasp slides while the second part was all about tasting the acids.

In all, it was a seriously informative event. In college, I took a year of general chem lecture/lab and a year of organic chem lecture/lab. The orgo labs were twice a week and three hours long. Lectures always passed over my head, but the labs were generally fun. The best memory I have of them was extracting caffeine from a green tea bag. Anyway, this lab was interesting, because it reviewed what I knew about chemistry and tied it into coffee- which made chemistry much more appealing.

When we’re talking about acidity here, we’re talking organic acid concentration, not the perceived acidity aka “brightness” that most people think of as coffee acidity. In the general pH scale, coffee is truly not that acidic. It’s at an average of pH 5, which is the same as bananas (scale of 1-14 with 1 being the most acidic). Surprising, because you generally don’t think about bananas as being acidic. Side note: I had a sore in my mouth today and ate a banana. Ouch! Acid concentrations in coffee are dependent on many factors, which can be divided into categories of farming, processing, and roasting. There is said to be a direct correlation between sugars in the seed and organic acid concentration.

During farming, factors that affect acidity include: temperature, humidity, species/variety, and altitude. Generally, the trend is: higher altitude have lower temperatures, creating more sugars, and producing more acidity. We were told that with each 300 m increase in attitude, there are 10% more sugars. Acids can be leeched during processing. It was also mentioned that acetic acid (vinegar) is a byproduct of washed coffees and can also be found during roasting.

Up to 21 acids are produced during roasting. Arabica beans are said to have more sugars than robusta beans; hence, arabica can taste more nuanced in flavor notes than robusta. Acetic and formic acids are said to disappear quickly during the roasting process while lactic acid can increase. According to coffeechemistry.com,

In one [older] study, two AA Kenyans were compared against a Colombian. In terms of concentrations, Kenyans had significantly more phosphoric and malic acid concentrations than the Colombian.

In another study analyzing several organic acids present in coffee, chloregenic acid had the most concentration in brewed coffee. You should note here that the source of this graph was cited to be a 1991 paper. Coffee has come a long way since then and organic acid levels most likely have changed. 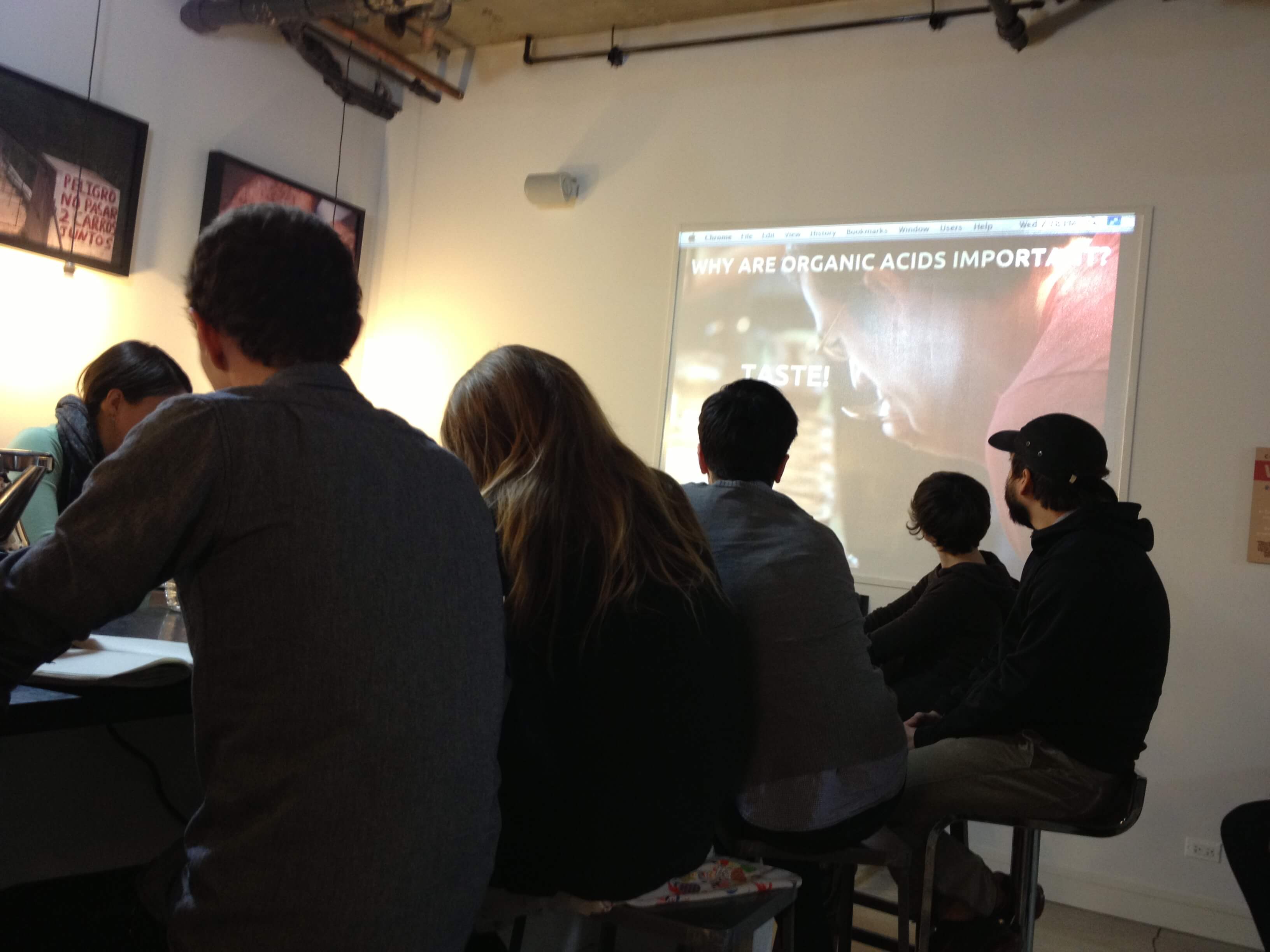 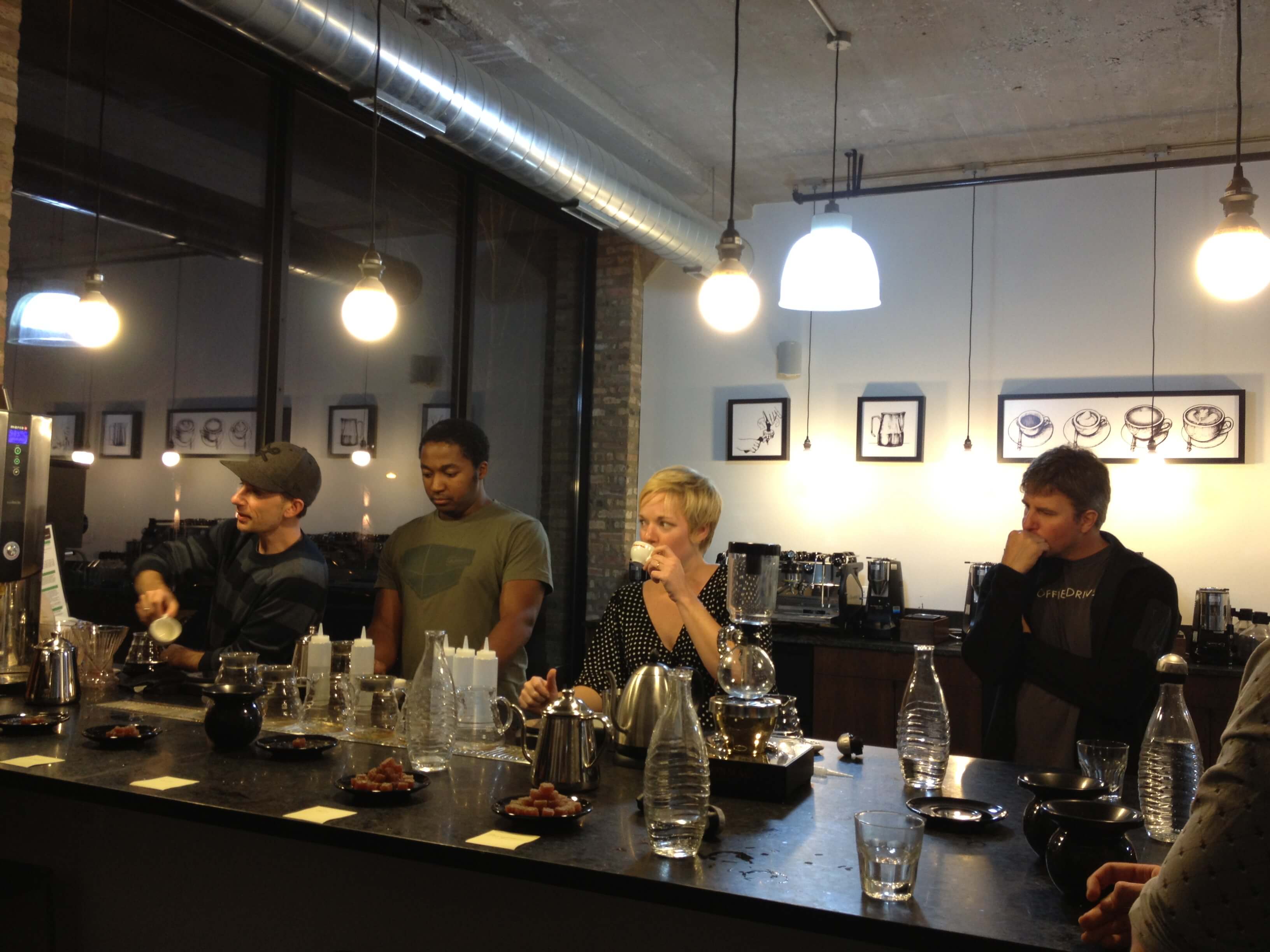 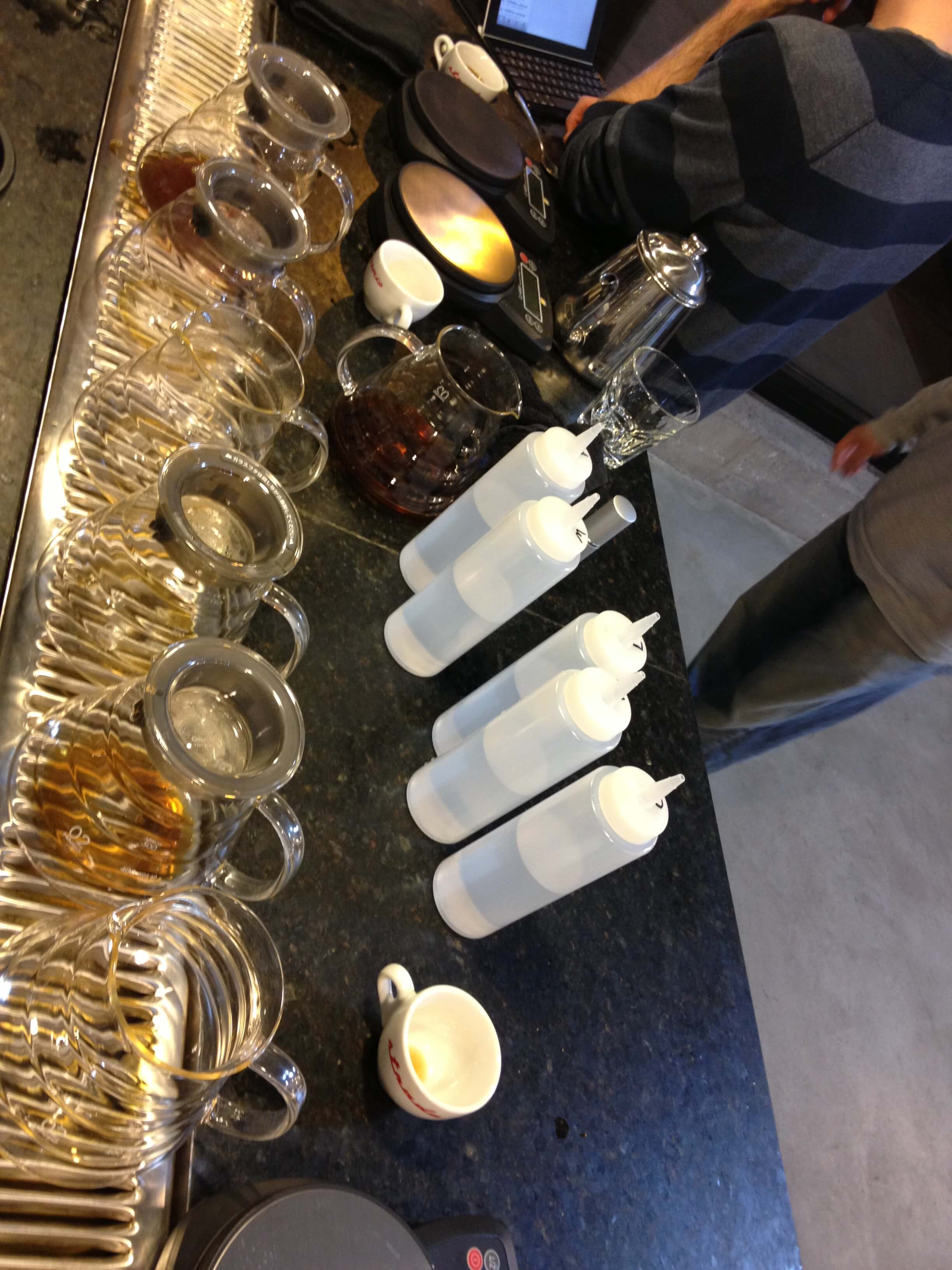 Then, we moved onto the tasting portion of the evening! First, we were told to try the base coffee. I want to say it was Bolivian, but I honestly can’t remember anymore. It was a coffee that was low in brightness so we could more easily identify acids that were going to be added. There were five acids total that we tasted. Each one was squirted into already-made coffee (method: Clever) and then passed around for us to taste. After one sip of the coffee (because, really, we couldn’t take that much literal acid), we tried the jelly version of the acid.

We tasted: acetic, citric, malic, lactic, and phosphoric acids. During the session, we often brought up Warheads and Sour Patch Kids. Coffee is never inherently ONE acid, but rather a combination of acids working together. This tasting forced us to taste what one-note acidic coffee would be like.

Acetic acid: aka vinegar. This was a painful one to taste, as it was nicknamed  “dumpster juice” and  “stinker.” Too much of this acid present in coffee could be a result of over fermentation.

Lactic acid: of the five, this was the least painful. As someone jokingly said,

What it does is provide more body to the coffee so it’s not just all brightness.

Malic acid: most commonly found in apples and grapes. The jelly of this acid tasted nearly identical to the sour grape Warheads. This was one of my more favorites (if you could have a favorite organic acid).

Phosphoric acid: Phosphoric acid is higher in concentration in robusta AND higher in Kenyan coffee… imagine that! This one tasted most like tonic water to me. To others, it was the “pop” that carbonation gives to beverages. I more easily identified tonic water, because my go-to drink in bars contains tonic water.

All in all, the lab was a great experience. I would’ve liked study source links, but that’s the scientist in me. I’d highly encourage others, especially coffee professionals to take a dive into organic chemicals (maybe not literally). You may want to brush up a little on your chemistry knowledge or at least familiarize yourself with how roasting can affect green beans. It’s not everyday you’re able to taste organic acids. At the end of this lab, a friend and I were ready to go for savory. I think I lost use of a couple of taste buds at the front of my tongue. A savory noodle soup helped settle the stomach, as well!